The earth is the growing cemetery of animal meat and body parts destroyed for food that never get eaten. People of conscience are grief stricken over the painful slaughter of these innocent creatures. The report and chart below show conditions and numbers of creatures whose lives were ended for “food” and their remains landed in the trash. The growing enormous mindless waste and uncaring attitude regarding suffering animals is inhumane, violent, corrupt, criminal, desensitized, and is the barometer of emotional numbness. Many of us are creatures of habit and unless we make conscious changes will continue to be mechanical robots. The food industry and the gargantuan amount of animals destroyed shows that we are disconnected from our emotions and any sensitivity regarding any and all living things. 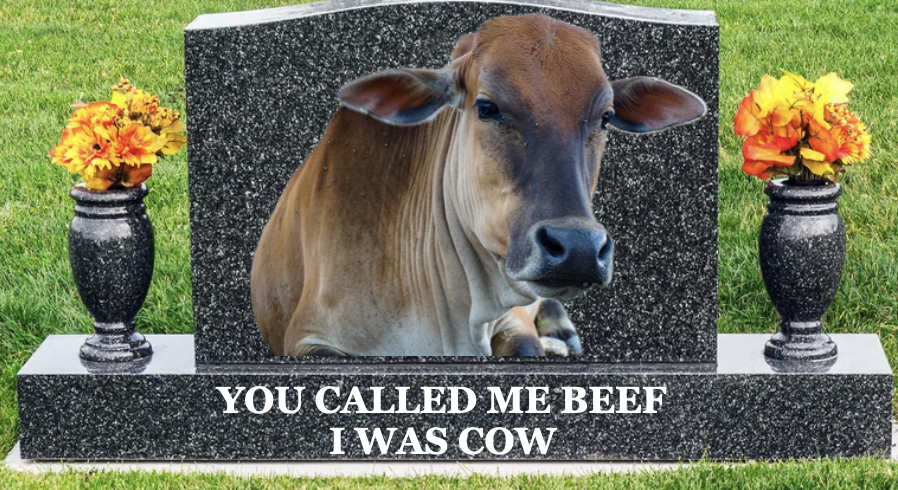 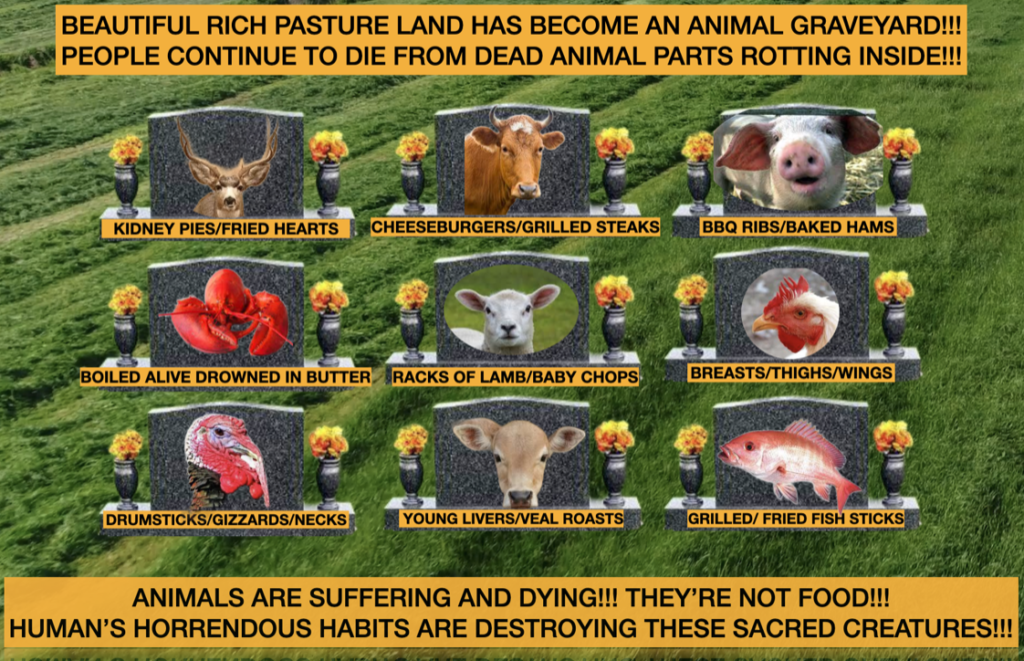 ANIMALS WE DESTROY FOR THE PURPOSE OF EATING THAT ARE TRASHED

WHAT SUPREME BEING WHO CREATES LIFE IS SUPPOSED TO DETERMINE DEATH? ONLY THE PRIDE AND EGO OF A HUMAN WOULD RESPOND WITH THE WORD "HUMAN!" 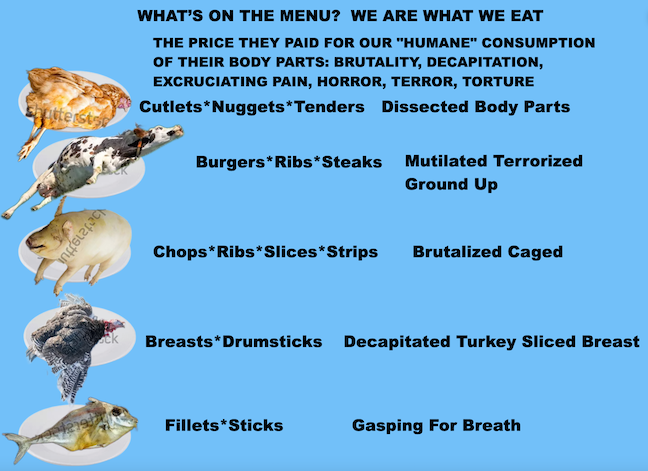 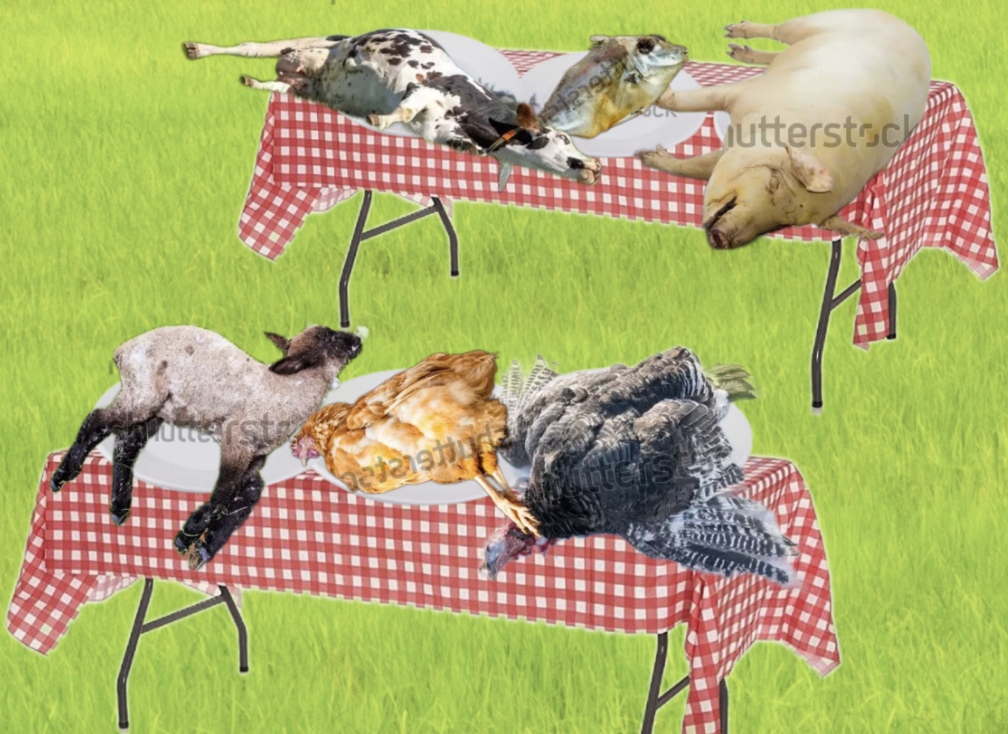 We waste a lot of food in the United States. We grow food at the farm that the farmers sometimes cannot sell. We lose food during processing and transportation. We overstock food at retail stores and throw away whatever goes unsold. We leave food on our plates in restaurants and in our homes.

Sometimes, this thing that we call food is actually the remains of a sentient and cognitively agile animal who wanted to live but who we killed anyway to serve as our food. Most vegans and vegetarians would agree that no animal should have to suffer or die for our food. But, even most omnivores would agree that there is something deeply wretched about inflicting lifelong pain and misery and finally death on an animal for food we are not going to eat.

The following bar graph shows the percentage of the edible weight of animal products that enter the retail market as food but which are not eaten and are just thrown away into our landfills. There are two kinds of loss depicted in this graph: losses at the retail level and losses at the consumer level. Losses at the retail level arise due to overstocked inventory, prepared food that has to be thrown away if not purchased within a few hours (e.g., rotisserie chickens), expiration of “sell-by” dates, and half-a-dozen other reasons. Losses at the consumer level also occur for a variety of reasons including impulse buying, large portion sizes at restaurants, spoilage, expiration of “use-by” dates, and our habit of over-filling our plates at buffets and in our homes.

The most significant factor in what gets wasted is whether it is perishable. The longer the shelf-life of a perishable food, the less likely it is to be wasted. Consumer-level waste also depends on whether the processing of a carcass happens at the consumer level with likely poorer efficiency. Fish and shellfish are more often trimmed, cut and processed at the consumer level in homes and restaurants; other meats are more likely to be processed before reaching the retail market. This is part of the reason that a larger percentage of fish and shellfish is wasted at the consumer level than of any other animal product.

There are several additional factors that play a role in what ends up eaten and what ends up in the landfill. Large portion sizes at restaurants mean that those animal products we are more likely to eat outside the home are also more likely to be wasted in larger quantities. The products that we more frequently use as ingredients in prepared foods—such as eggs and cheese—are also more likely to be thrown away without being eaten. Foods that are more often eaten by children are also more likely wasted in larger quantities. Picky consumer expectations about exactly how “done” meat should be can lead to waste; for example, 2 to 5% of red meat is thrown away at some restaurants because it would be considered overcooked by the customer. Animals that are more often eaten during the holidays (ie turkeys/pigs are left uneaten more often. Higher-income families waste more than lower-income families.

Not only do we waste a larger percentage of fish and shellfish than of any other animal product, but we also use a larger number of them than any other animal we use for food. Eliminating just half of the waste at just the consumer level could spare the lives of more than 15 billion fish and shellfish that are killed for the US food supply each year.

Even though we waste less of the chicken we buy than of any other animal product, we do use chickens for food in larger numbers than any other land animal. Eliminating just half of the waste at just the consumer level would spare the lives of over 500 million chickens used for their meat, over 35 million egg-laying hens, over 15 million pigs, and over 3 million cows each year.

All animals who die for our food die for nothing. Because we can thrive just fine without eating them. The tragedy of animal suffering today is no more poignant because hundreds of millions of animals suffer and die only to end up in our landfills instead of on our plates; the tragedy is that this waste adds to the already large number of animals we use, abuse and kill for no good purpose. 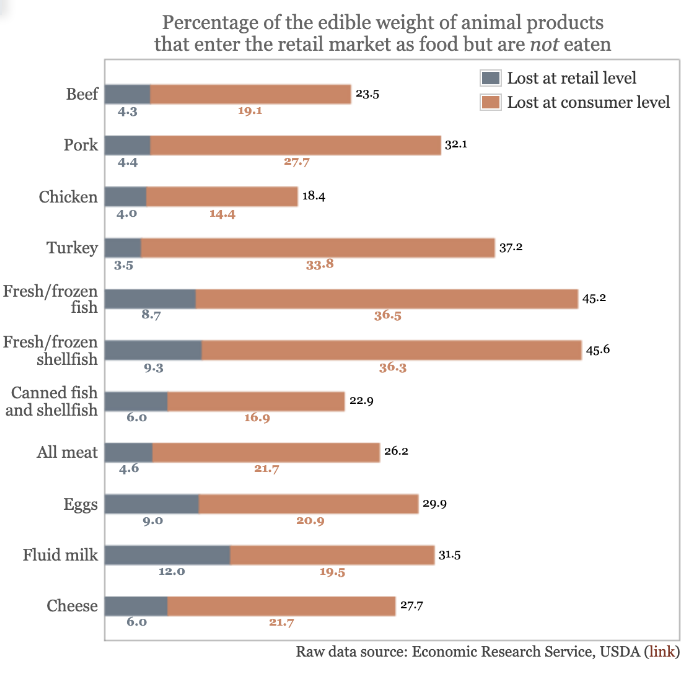